An Illustrative Event: “Texting in the wrong context”

On a  Wednesday night in March, at the rough-and-tumble yet authentic Men’s Bible Study group I’d been part of for 2 years — one that meets in a guy’s workshop, with work tables, table saws, saw horses, unfinished projects, and more tools than most guys would know what to do with scattered around, I sat beside George — someone who had joined our group a few weeks earlier. As we were sharing what God was doing with us unfinished projects, and as we were discussing the designated scripture text of the day, and maybe even while we were praying – from the sounds of the clicking – George was texting on his phone. He was doing so often enough that I was getting annoyed. I was trying to think of a way of correcting him gently. I knew he was new, I knew his awareness of social protocols was not the same as mine. But even so, the distraction was becoming too much, and I was interpreting his texting as disrespectful. I had formulated in my mind the gentlest corrective reprimand I could manage, and just as I was taking a deep breath to start speaking to him, he leaned over to me and said “I’m going to need some help and advice afterward, this is the kind of thing you are more used to dealing with.” as he pointed to his phone. So I held my reprimand. To finish the story in a way that you will relate, I need to tell the backstory.
George had been homeless-by-choice for many many years. He lived in a shack he built in the bush. He was not an addict or mentally ill, he was not handicapped in any major way, he was just a loner by preference and lived by different social rules than most. 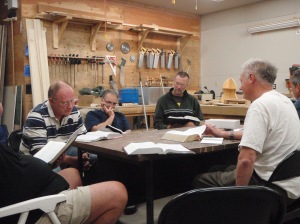 The shell: What Goes around Comes Around:

About two years earlier, a couple of men had a conversation in which they shared they would like to study God’s Word more. They invited a few others, including me, to join them, and unique men’s group was born. About a year and a half before the texting event described above some members of the group felt a desire to be more active in food distribution to the poor in the community. That faith-driven call to action came out of a focused prayerful time of asking for God’s leading when one of the guys sensed God was asking us to do more than just meet together. So the very next Sunday the foodbank bin at church began to fill. The Sunday after that, it was overflowing. The third Sunday they began bringing the food away right after church each Sunday, there was so much. Soon we were asked to become a distribution depot for the city foodbank network called “Loaves and Fishes.” And so, on Monday afternoons, CCC became a local food distribution point for Loaves and Fishes.

In the weeks before I moved away from Nanaimo, almost 200 genuinely needy people were being helped each Monday by that distribution.

Our first contact with George was when he began to come to get food. As the volunteers came to know him a bit, we learned he was good a fixing things, and when the church had a garage sale, he was asked to check some things over that needed repair to make sure they were salable. Then he was asked to do some painting of walls in the church, and somewhere along the way we learned he needed an operation on his foot but was not getting it because he had no safe, caregiving place to stay when he was recovering from surgery. George was apparently completely “off the grid.” So the guy who owns the workshop we meet in offered to build a small room in a corner of that large workshop where George could recouperate, and our deacons offered meals delivered while he was there. This resulted in him living there more or less permanently after his foot had healed, though he spoke often of returning to his shack in the bush. He was using the workshop as a base for the repairs he does, often for nothing, for other poor people. Since he lived in the shop, though it took a bit of persuasion (it was hard for him to be part of large groups of people. He could handle 3 or 4 at a time ok, but 6 or more made it difficult for him) he began joining us on Wed nights for our bible study in the same workshop. George much preferred nature, birds and plants and things to fix. He avoided the complex complications of human relationships. He began participating even though he had no familiarity with scripture, but as he listened to us pray and speak about scripture and our walks with God, a light went on. The “Being” he had had a running conversation with in his life, the one he would say to “Hey, it’s a nice sunny day, can you hear the birds, thank you for the birds” was the God of the Bible! He began to devour scripture, thinking up questions and then searching for answers.

The wisdom and unique perspective George brought to our group since then has at times been astonishing, and certainly humbling to us who love to debate scripture sometimes more so than live it.

One thing George did in his operation recovery time was go to a nearby gas station/coffee shop, have coffee and sit and read his Bible unobtrusively. He got to know the owner and the staff at that place. We had a good laugh just two weeks ago when he innocently reported he had taken a handful of Bible study Magazines and put them in the magazine rack covering the exposed porn magazines. He got in no trouble. We laughed. We wouldn’t have thought of that. We would have maybe had a good debate about the merits or risks, about whether to get approval or risk having to ask forgiveness, and things like that. George? He just did what came to mind.

The last night I attended the group before moving, George shared he had been offered a job at that station! Someone since has verified that he had begun working there. Go figure! So God used a desire to help the poor which he put into some of us with some resources to bring us a supposedly poor person who enriched our group greatly. What goes around comes around, and you never can predict what outcome a faith driven action will have. God is good. Being part of his ways of doing things, though befuddling at times, is very unique and exciting too. It puts you into a mode of “Just what might God be doing next?!”

Men's Bible Study in the workshop in 2009

Back to the Texting

So, now, back to the Wed night I began telling about, in April 2011. I was struggling to be patient with a guy who “doesn’t know the rules” of a bible study and instead of focusing on the text and context, was testing my patience by texting with someone outside.

After the meeting, he told me what was happening. An employee at the gas station/coffee shop had started asking George what he believed, what he sees in the Bible, and as our meeting began she texted him first saying (not exact words) “I have a real hunger for what you have, you seem to have a peace that I want” along with “I have something to confide in you on, are you open to hearing it?” (which is where he had turned to me a bit afraid and decided he would need some advice).

So George, a guy who came to the group as a result of the group starting to be active in ministry to the community was being used by God and using text messages in the middle of a bible study to connect with someone in the community while in that group.
I love this stuff! Praise God for it!!!
No human program, no human committee, no human strategy session can author such unique sequences and loops of events.

On April 30th, I got a terse email from George’s host, saying he had found him deceased in his room. It was a shock.
I had been looking forward to maintaining contact with George via email as my journey and his continued, and I was prepared to celebrate God’s goodness to him as he continued to learn and grow in his walk with God. He was worried about me moving to tornado country. When I emailed the group an update saying I had been turned back at the border and was now “almost as homeless as George” he sent me a response that revealed his caring nature and twinkly-eyed humour:

It was already precious to me when I got it on Apr 20th, but it’s meaning is changed, deepened. I believe he has built his dream shack by now, and regularly steps out of it saying “Thank you God, Thank you for the birds, thank you for those rough-and-tumble guys I came to know and for using them to help me find the book about you, and thank you for this home.”

I will be thanking God for some time, through tears, that I had the privilege of having known George briefly, and having learned about God’s unique ways from George.